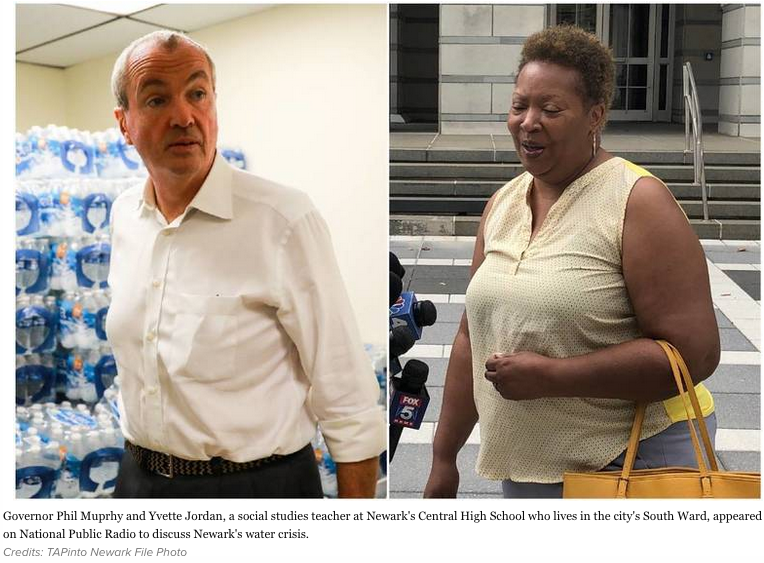 New Jersey Gov. Phil Murphy and a Newark resident disagreed over the effectiveness of official relief efforts for the city’s lead water crisis in a national radio broadcast today, including the need for a state of emergency to deal with the deepening crisis.

“I absolutely think they are. I think Newark is getting ahead of the problem,” Murphy said, noting the city’s chemical corrosion control program and its 10-year plan to remove the lead service lines in affected areas.

“There is no amount of effort or energy that any state or city can put into this that can match what the federal government can do,” Murphy said. “This is far beyond Newark or any other community in New Jersey. This is a national challenge. That’s the x-factor that I don’t think any amount of effort by the city or state can replace.”

Chakrabati then pressed Murphy, saying residents of Newark who are now relying on bottled water “would totally disagree” with the notion that the City of Newark is ahead of the problem.

“You hear about long lines for bottled water – there is no evidence of that,” Murphy said, noting that state troopers are posted at each of the city’s bottled water distribution locations to help in delivering what he said was about 1,400 cases of water a day to the affected areas.

“I have enormous sympathy with folks, particularly the most affected, the very young, the pregnant, the nursing and the very elderly,” Murphy said. “The city is delivering for folks who don’t have the wherewithal to come get the water. It’s being delivered to them. We’re going to continue to work with the city until we get this right.”

Chakrabati then shifted to an interview with Yvette Jordan, a social studies teacher at Newark’s Central High School who lives in the city’s South Ward. The water at Jordan’s home has tested almost three times higher than the federal action level of 15 parts per billion.

Jordan said that initially she had seen only 15 to 20 people standing on line for water in the South Ward last week, a number she found disturbing, as she responded to Murphy’s remarks.

“There is a lot of apathy, ignorance, and unfortunately naiveté in terms of what is happening in our community,” said Jordan, who is part of a lawsuit filed last year by environmental and education groups against the city and state officials, charging that their violations of federal law have resulted in dangerous lead levels in Newark’s drinking water.

“When I was on line, I saw several elderly there who said ‘I don’t know how I’ll carry it.’ That has happened at several drop-off centers,” Jordan said. “The governor said that the mayor has arranged for our elderly and home-bound receiving water. I’m not sure if that’s so. I know of several cases where they’re asking for it and nothing is coming. Other residents and their neighbors are helping them out.”

Jordan went on to state that the 48 bottles she received in one week were not enough, and that while she can afford to buy around $30 worth of bottled water a week, many of her neighbors cannot.

Jordan’s most dramatic divergence with Murphy regarded whether a state of emergency should be declared to deal with Newark’s lead water crisis.

State Assemblyman Jamel Holley, a Democrat from neighboring Union County, sent a letter to Murphy and Baraka on Tuesday asking the governor to declare a state of emergency. Murphy publicly responded on Wednesday that he would not do so, while Baraka wrote Holley a letter, saying the measure was unnecessary.

Jordan was asked about Murphy’s repeated assertions that Baraka was out ahead of Newark’s lead water problem.

“That’s almost comical, and sad at the same time. For 18 months, our city was not really moving fast enough,” Jordan said, a reference to the fact that the city’s water first exceeded lead level standards in 2017.

“Our only way of moving this forward is if our governor actually says it’s a state of emergency,” Jordan said. “The public education issue in terms of this is really disjointed, so because of that there is no logistical plan for the residents. One person is hearing one thing. Somebody else isn’t sure. Others are getting angry.”

“If we had a coordinated effort, which unfortunately only happens when you have a state of emergency, then all of the agencies must work in concert. That is not happening now.”

At the end of the interview, Jordan alluded to a shifting community dynamic in which Baraka was seen as a “local champion” who pushed back against the establishment.

“When we see something happening in our community, especially a public health crisis, and then thinking that Ras is not helping us, so many people are saying ‘no, he wouldn’t do that,” Jordan said, “That is a concern and problem in our community.”

The host of the program repeatedly noted that Baraka was asked to go on the air, but declined.