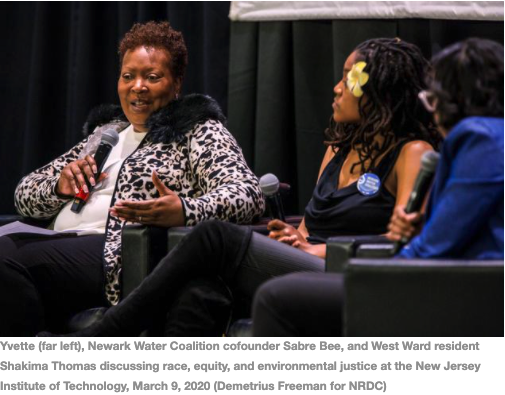 NRDC – Women’s History in the Making

In 2018, Yvette discovered that her drinking water in Newark, New Jersey—where she lives and teaches high school—was contaminated with sky-high levels of lead. In fact, levels rose to some of the highest of any major city in the country.

So Yvette, alongside a coalition of neighbors and allies, started “screaming and yelling” for one thing: a concrete solution.

As a member of the Newark Education Workers (NEW) Caucus, an advocacy group of public school educators, Yvette worked with NRDC to file a lawsuit against the city and state, which would force the replacement of the toxic lead pipes causing the crisis.

Despite pushback, their advocacy garnered national attention—and worked. The case was settled in 2021 and led the city to replace nearly 23,000 lead pipes in under a year, a project that was originally estimated to take a decade. This has made Newark a national model for change.

Now Yvette is supporting other similar efforts, whether it’s by participating in panel discussions on clean water across the country or co-chairing a committee for a lead-free New Jersey. But perhaps most important: She’s teaching those facing environmental injustices why their experience makes them particularly effective advocates. “I feel it’s my mission to raise the voices of the disenfranchised,” Yvette says.