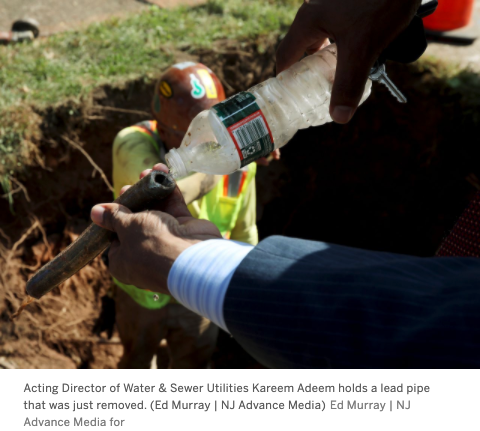 President Joe Biden has called to replace 100 percent of the country’s lead pipes as part of his American Jobs Plan, to prevent the toxic chemical from flaking off into our drinking water. Cities should take a page from Newark, which treated this like the health emergency it is, and got the job done way ahead of time.

Not only did Newark replace nearly all of its 18,500 lead pipes quickly – raising the money through a bond to speed things up and make it free for homeowners – it involved local people in the effort. The city created an apprentice program that trained 50 Newark residents, 32 of whom are still on the job, and provided help to local businesses so they could bid for pieces of the project.

“We’re fixing a problem in our community, so it only makes sense that there should be an opportunity for our people, especially during COVID, to benefit,” Mayor Ras Baraka said.

He stumbled out of the gate, misleading the public about the problem with a notice that said the water supply was safe (the fine print was that the lead pipes weren’t), and attacking the Natural Resources Defense Council, which was there to help This lead pipe replacement is all being done based on a settlement between the city and a coalition including the NRDC and a brave and determined group of Newark teachers led by Yvette Jordan.
But the mayor deserves real credit for getting the job done swiftly and innovating to get Newark residents involved. “They’ve gone from downplaying the risk early on,” Erik Olson of NRDC notes, “to really taking very aggressive steps to start removing lead service lines – some of the fastest lead service line removal implementation in the country.”
And rather than saying nobody local qualified for the job and hiring some big contractor from a suburb like Caldwell, the city empowered locals to do the work and wrote directly into its contracts that companies had to hire Newark people to get the money.
About 80 percent of those trained were previously unemployed, says Water & Sewer Director Kareem Adeem, who began with the water department as a laborer himself, and worked his way up. The city paid for their transportation to a training site, where a local union provided instruction. Now dozens of apprentices are earning up to $40 an hour, along with health benefits, to replace the old lead pipes; and they can find future work through the union.
“We’ll still have a couple of those employees working for us after the project is finished,” said Dominic Santaite of Montana Construction.
Invest Newark, the city’s economic development corporation, also used $2 million to create a program that loaned minority-owned companies money upfront, so they could lease equipment and take care of payroll. As a result, they won $58 million of the $158 million in contracts for the project. “We know why we can’t compete,” Baraka explains. “We don’t have the upfront capital. We don’t have the machines, and our balance sheets are not where they need to be for a mid-sized company.”

Plumber James Reaves, a subcontractor on this project, knows the struggle well. “As minority contractors, we don’t really have the opportunity to be a primary contractor that much,” he says. “The bigger companies have the $10 million bond that can get the job, and they turn around and hire the minority contractor, so he can still have work. That’s me.”

Reaves, who is 60, got his start as an unpaid maintenance man for his mother, a landlord in Newark, then learned the plumbing trade in the Navy. Now he’s overseeing apprentices swap out the lead pipes. “A lot of the minority guys we’re working with, they couldn’t do that type of service at first, but now everybody’s learning, and I can just leave the guys to work, and they can do the services by themselves,” he said.

His dream is to eventually get a big contract like this himself. His 22-year-old apprentice, Talid Broxton, looks forward to getting his plumbing license and starting his own business, under his own name. “We take care of our city,” he said. “When we’re doing the water lines, it’s like we’re doing a personal job for ourselves.”

So give Baraka his due: Not only is he fixing a public health crisis, he’s fighting unemployment in his city with good, living wage jobs.