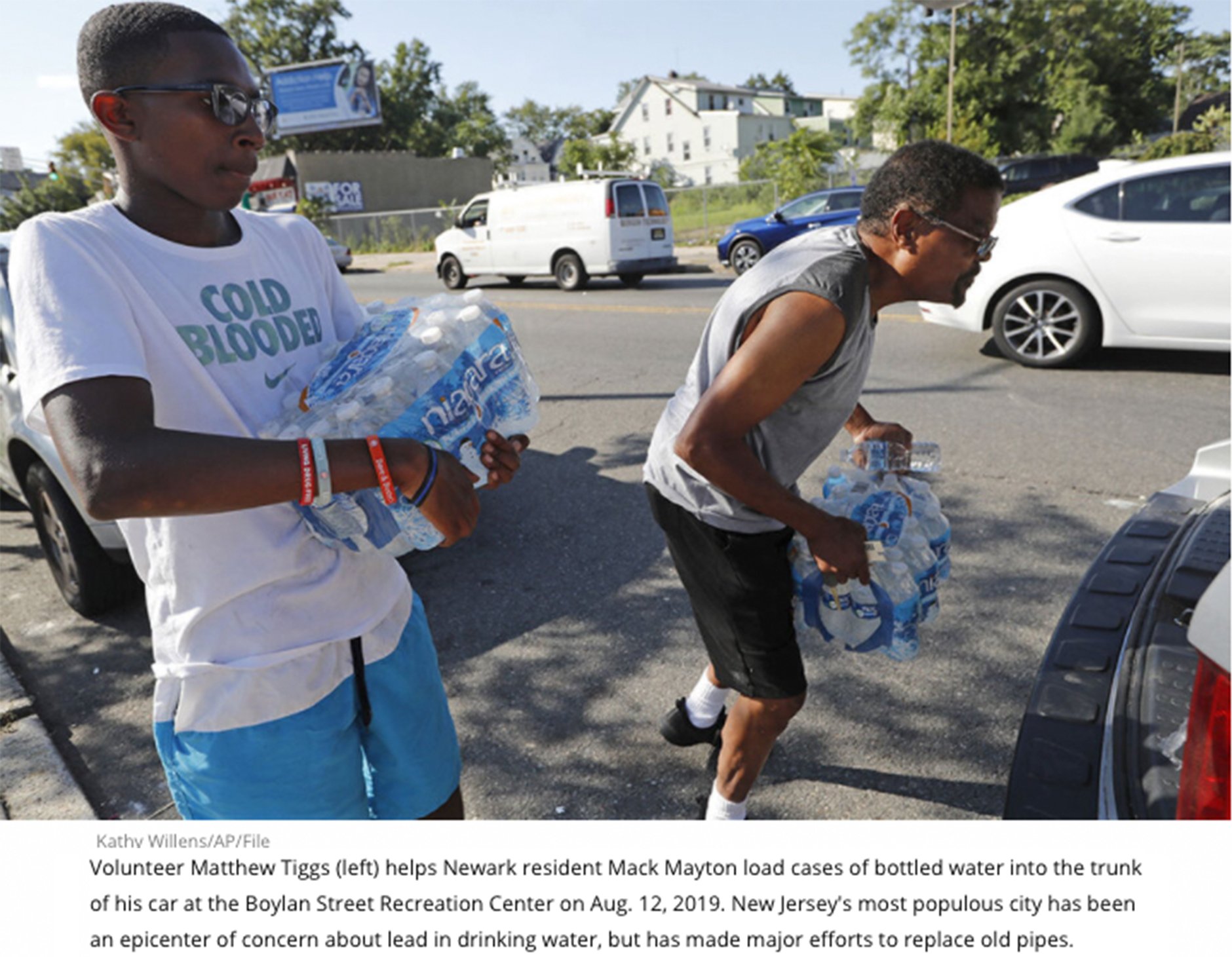 Lead-tainted water: What Newark can teach US about investing in safety

Yvette Jordan remembers the day she learned the water fountains at her school were dangerous.

It was in March 2016, and Ms. Jordan was teaching history at Barringer High School in Newark, New Jersey. At a gathering in the school’s gymnasium, she recalls, city officials told the crowd that high levels of lead had been discovered in the school’s drinking water, which public health officials say is harmful to both children and adults.

The officials insisted that Newark did not have a Flint, Michigan, situation – a reference to the lead-laced drinking water crisis that had made national headlines earlier that year. They would just need to shut down the water fountains. But additional tests revealed high lead levels elsewhere in the city’s water system, and community members began to mobilize.

“Water is a right,” says Ms. Jordan, who is also the chair of an educators’ social justice group called the Newark Education Workers Caucus. “This is something folks have to really, really push.”

For the next five years, city lawmakers and advocates fought about the extent of the lead pipe problem in Newark, and about what to do about it. There were protests, angry citizens, defiant officials and a lawsuit. But eventually, there was also something else: progress.

Today, Newark has replaced almost all of its approximately 20,000 lead service lines – a remarkable feat given the logistical and financial challenges in digging up and retrofitting pipes that connect private residences to the city’s main water lines. Ms. Jordan’s group, which had sued the city, agreed earlier this year to settle without collecting damages, saying it was satisfied with officials’ efforts to ameliorate the situation. Now, Ms. Jordan consults with other community groups that are part of a new movement across the country – from urban centers to rural towns – to fight for clean drinking water and fix America’s crumbling water infrastructure.

“Flint helped awaken a lot of people to the problem,” says Erik Olson, an advocate for drinking water protection at the National Resources Defense Council (NRDC) in Washington. “I’ve been working on this for 35 years, and I’ve not seen this kind of movement on water infrastructure in my career.”

Enormous work lies ahead. Yet the rising grassroots efforts are seen by many as an important sign of hope.

“It’s been out of sight, out of mind” 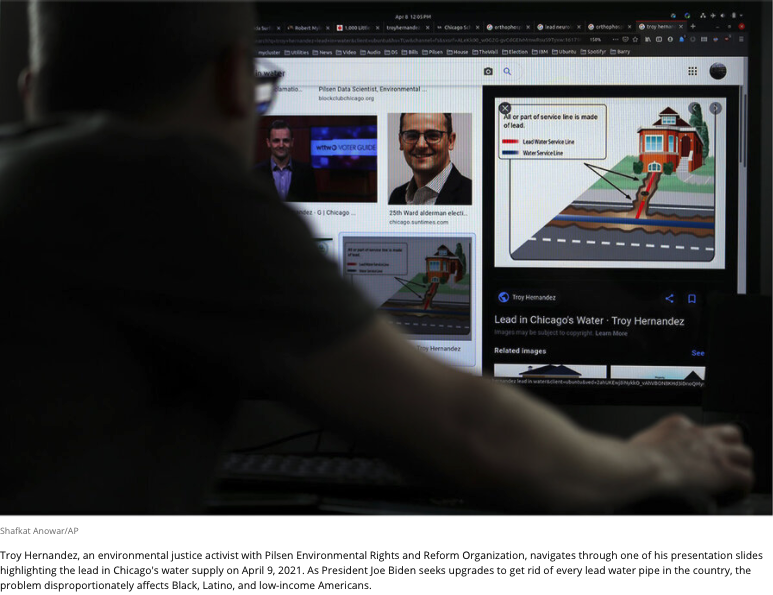 Lead pipes are no exception. In Illinois, the state with the highest concentration of lead pipes, Black and Latino residents are twice as likely to have a lead service line as are white residents. For a host of reasons, including long-standing housing discrimination, Black children are also disproportionately exposed to other sources of lead, such as old paint, which compounds the health effects of contaminated drinking water, officials say.

Much of the current focus on lead water pipes began in roughly the past half decade, when thousands of children in Flint, Michigan, were exposed to elevated lead levels after officials switched the city’s water source – an attempt to save money that ended up corroding existing pipes and allowing lead to leach into drinking water. But only more recently, advocates say, has there been a growing recognition that lead pipes are a problem everywhere.

“It’s a huge issue in every state,” says Mr. Olson. Lead pipes are “in red states as well as blue states. They’re in small communities as well as big cities.”

This may be one reason why there is such widespread and bipartisan support for fixing the problem. A national poll this spring, conducted by Morning Consult for the Environmental Defense Fund and other advocacy groups, found that 80% of voters support funding the replacement of lead pipes. That included 74% of those who voted Republican in the 2020 presidential election and 85% who voted Democratic.

The $1 trillion infrastructure plan that passed the Senate last month includes $15 billion to replace lead service lines – a total well down from President Joe Biden’s originally proposed $45 billion, but a number that some supporters have called “historic.”

The challenge is massive. Many municipalities don’t even know where lead service lines are buried; others estimate that it could take decades to replace them. Often local governments struggle with the cost of replacing the lines.

But as Newark and a collection of other communities show, success stories are growing.

Bennington, Vermont, with a population of around 15,000, may be one of the first towns in the United States to replace all of its lead service lines, according to officials there.

Town officials had long recognized that lead pipes could pose a risk to residents, says Bennington Town Manager Stuart Hurd. They had spent decades adding anticorrosive chemicals to the water supply in an attempt to prevent leaching and were gradually replacing pipes they found in the course of other municipal work. But after Flint, Mr. Hurd says, the federal government started providing more funding to remove private lead service lines – and Bennington officials saw an opportunity to get rid of the town’s lead pipes completely.

Indeed, part of the difficulty in wide-scale lead pipe removal projects is that much of the at-risk infrastructure is considered private property. These service lines connect homes to a central water main and have traditionally been considered homeowners’ financial responsibility.

Who has to pay?

But asking residents to pay to remove lead service lines regularly ends in disparities. After officials in Washington, D.C., created a policy of sharing the cost of lead service line replacement with homeowners, whiter, wealthier residents were twice as likely to end up with lead-free water as Black and lower-income residents, researchers at American University found last year. The city later began paying for the entire removal process; in June it announced a goal to have all lead service lines in the city removed by 2030, with a priority on underserved communities.

“In our minds, the only way to equitably and, frankly, just effectively deal with this issue is to have funding available to pay for the entire process without cost to homeowners,” says Maureo Fernández y Mora, associate state director for Massachusetts at Clean Water Action, who has been working with residents in Chelsea, Massachusetts, to replace lead service lines.

In Bennington, officials applied for and received $11 million to pay for the entire removal process. Now, Mr. Hurd says he expects the town to be free of lead pipes within two years.

This is quick compared with other municipalities, many of which estimate it will take years, if not decades, to replace their lead service lines. Part of that rapid timeline is because of Bennington’s relatively small size. But it is also because the town has worked for years to identify where the lead service lines are located, Mr. Hurd says.

The town also contracted with an engineering company that manages all the removals occurring on private property where city employees don’t work. This has simplified coordination with property owners, he says.

Clean Water Action has taken similar steps in Chelsea, but with a different lens. In that city, most of the residents are renters, and many are wary of any government officials because of their immigration status, advocates say. So Clean Water Action, along with a local environmental group called GreenRoots, worked as a go-between, talking to residents and then communicating with city officials and utilities. By December of last year, Chelsea had replaced hundreds of lead service lines.

“I’ve seen a big change in the last few years,” says Lynn Thorp, the national campaigns director for Clean Water Action. “I think it has a lot to do with water systems and governments realizing that they do need to be concerned about equity.”